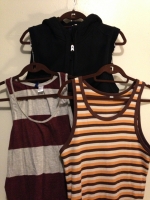 Two of Michael's colorful new shirts against a dark, baggy top from the past

Many men are not very open to discussing excess breast tissue, but Michael’s reluctance to face his condition or even give it a name went beyond that of many people. “It was like a dirty little secret,” he remembers.

During college and into young adulthood, Michael wrestled with man boobs—the more common term for gynecomastia. The New York resident and theater professional tried his best to ignore the problem. His chest wasn’t huge, and Michael says that somehow that made it harder to tackle the issue. “I didn’t think it was that obvious, and if it had been perhaps I would have had to embrace it.” Michael mostly thought about his body in terms of “if only.”

It was around age 16 when Michael first started to notice unwanted tissue on his slim frame. He always wore baggy clothes in high school and he didn’t view his chest as a big problem at the time. He believes it’s because self-image wasn’t top of mind until it was time to establish his adult self.

After college, Michael moved to Manhattan for work. He dressed in layers and did not remove his shirt at the gym. At this point, gynecomastia was having an increasing impact. The theater is a very body-conscious environment, Michael explains, and he was bothered by what he felt was a physical imperfection. He began to realize that his poor self-image spilled over into the rest of his life. His condition put him “through the gamut” of feelings, he says, and caused him to be fixated on that imperfection.

Michael researched his condition online, hoping there might be a natural remedy. He learned from other men that male breast reduction surgery was the only option, and that he should choose a highly experienced plastic surgeon. After months of returning to the Internet over and over, Michael said one day he realized, “this could be different.” That day, Michael switched from feeling bad about his physique and full of doubt and worry to “yes!”

The most difficult hurdle was picking up the phone to call Dr. Jacobs’ office. After that, everything fell into place. As Michael recognized he had a problem “that needed to be changed,” worry was replaced by wonder. “Wow, I’m walking into a plastic surgeon’s office! I never would have predicted that for me.” Michael remembers being at ease from then on, even describing the experience as “thrilling.”

Surgery went well for Michael, as did recovery. He made sure to follow Dr. Jacobs’ instructions, conscious of the investment he had made and wanting the best possible result. The one thing he was not prepared for was how his body looked when he removed the compression garment and dressings for his first shower. “The wrinkles, pale skin, bruising, swelling and iodine marks—it was a bit freakish!” Michael recalls his torso looked a little better each day, and within a couple of weeks he was much improved.

Like many plastic surgery patients, Michael looked in the mirror many times daily. It became a sort of ritual. Swelling took a few months to dissipate and sensation returned gradually. Finally, about eight months after surgery, Michael felt the recovery process was complete.

As he looks back, Michael says without hesitation that male breast reduction “really did change my life.” He enjoys shopping for clothes that actually fit well, saying he often wears size small and even extra small. Most remarkable is Michael’s new acceptance of his body. He now feels free to take on other, more important goals. He signed up for a month long fitness program, for example, and said he did not once feel the need to think about how he looked.

“I like feeling confident and self-assured,” Michael says. “Now I have nothing but optimism for what’s ahead.”

Back to Patient Stories »